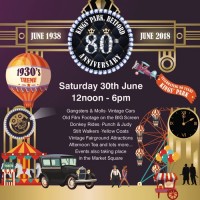 On the 29th June 1938 Retford gained, what we now fondly describe as "the jewel in the heart of the town", the beautiful Kings' Park.

Bassetlaw District Council, in partnership with EES Showhire and supported by Retford Business Forum, Retford Civic Society and other bodies, are inviting everyone to join them in celebrating the 80th Anniversary of this outstanding, national accredited, Green Flag site.